Prescribed management rule (“PMR”) 7 requires nominations by owners for the election of trustees at any annual general meeting (“AGM”) to be given in writing, accompanied by the written consent of the person being nominated at least 48 hours before the meeting. If insufficient nominations are received before the AGM, then further nominations can be given, with the nominee’s consent, at the meeting. 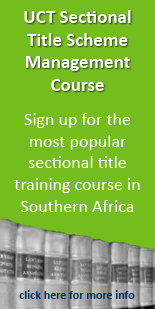 A student recently raised the following interesting scenario which takes the matter further:
If four trustee nomination forms are received 48 hours before the AGM, three of which are for non-owners and one for an owner, and if the meeting then decides there will be seven trustees, can the chairperson ask the meeting for only three more nominations, insisting that all further nominations be of owners – or must the chairperson accept all further nominations from the floor?

The answer is that all further nominations must be accepted from the floor, regardless of whether these are for owners or non-owners. If the chairperson limits the further nominations to only three persons who must be owners then s/he would be prejudicing all the other potential nominees. The argument that only three owners should be nominated at the meeting to fill in the vacant trustee positions presupposes that the four persons nominated before the meeting will fill positions as trustees. The persons who were nominated before the AGM are not in a privileged position due to the fact that their nominations were lodged earlier than those persons nominated at the meeting. If there are insufficient prior nominations to fill the number of trustee positions decided upon at the meeting or the number of owner trustee nominations is not sufficient to form a majority of the total number of trustees the members have decided will be elected, the chairperson must call for further nominations and all the nominated persons in the category of owners (or their spouses) and non-owners, regardless of when they were nominated, must be given an equal opportunity to be elected.

Once all the nominations have been given, the meeting must vote. Once the votes have been tallied, the chairperson must check how many of the trustee candidates are owners or spouses of owners and how many are non-owners. If the number of non-owners outweighs the number of owners or spouses of owners then the non-owner trustee candidate with the lowest number or least value of votes must be eliminated and this process must be repeated until the correct number of trustees is achieved with the majority being owners or their spouses.

This article is published under the Creative Commons Attribution license.
Back to Paddocks Press – August 2010 Edition
Previous Post Capital of nature or capital punishment Next Post Who pays for balcony waterproofing repairs?

Hello, please can you advise. Can the nomination of an owner as a trustee be vetoed? How must an objection be presented? Our complex had 22 homes, approx half either rented out or holiday homes. The atmosphere in the complex, between the owners is toxic. I would like to propose a management company be appointed instead of having trustees. Or a split between both- trustees elected who live on the estate, to manage the sewerage system and finances. The rest with independent management. I appreciate your feedback .

Thank you for your comment. We are more than happy to help, however we do not give free opinions / advice. Please email us on consulting@paddocks.co.za with regards to your matter, and we can provide you with a no-obligation quote, so that we can assist you. Alternatively, join us on http://www.paddocks-club.co.za.

May a current Trustee nominate him/herself for the next year?

Thank you for your comment. We are more than happy to help, however we do not give free opinions / advice. We do offer a 10-minute consultation telephonically for R390. If you are interested, please email consulting@paddocks.co.za.

I recently resigned as a trustee as the two other trustees were blatantly breaking the rules.
A 3rd trustee was appointed by the remaining 2 trustees without any meeting/notice or advice to the BC.
Is this constitutional?
BR
Joe

We have a situation we were elected 5 trustees at the AGM, a few months later 3 trustees resigned. The 2 trustees then co op an outsider with no vested interest in our complex. We now have 3 trustees of which 1 is an owner the other one the spouse of an owner and the 3rd trustee who is a non owner. Is this legal?

Thank you for your comment. We would love to help, however we do not give free advice. Here’s how we can help:

– We offer a 1-week Free Basics of Sectional Title short course.
– We offer consulting via telephone for R490 for 10 minutes. Please call us on 021 686 3950.
– We have Paddocks Club, an exclusive online club, to help you get answers to your questions about community schemes.

Hi I live in a block of flats which is sectional title, the treasurer and secretary nominated themselves, no written nominations, all decisions are made by the treasurer, the secretary has previously served on the board and made decisions of grave concern and also handed over to the new committee with no funds available,condition of building is of grave concern, nothing is being done to uplift the building. there are funds available from previous treasurer, but the are demand funds for every project from owners, they have even asked a student auditor working for a company who is known to one of them and submitted a report with no accreditation from the auditor no company name , just her name and surname, can you please assist with some information on this issue

Thank you for your comment. Please note that our legal team would need to advise you on this matter. Please send the details through to consulting@paddocks.co.za, and the team will provide a no-obligation quotation for their assistance with your query.