A1: In terms of the South African common law all notices of general meetings must be in writing unless the constitution of the body provides otherwise. 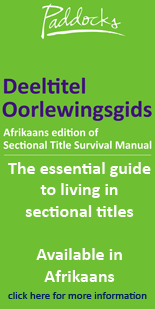 If the scheme’s rule were changed so as to allow notice of meetings to be sent via email the rule providing for this would have to have an “opt-in” provision. This provision would allow owners who want to receive notice via email to notify the trustees in writing that they are happy to receive notice in this way, but would also allow those people without access to computers to continue to receive notice by post or by hand. If there was no opt-in provision the owners without access to computers would be unreasonably prejudiced by the amendment to the rules.

Q2: Most of our owners are long distance and in order for a nomination to be confirmed it needs to be signed by the nominee as accepted, is this correct and secondly, does the nominee need to sign the “I am of sound mind etc”. What happens if the nomination is not signed but the person is present at the meeting, can he or she not just confirm acceptance there? Secondly the proxy form, can one stipulate a yes no system on it for voting. In other words I want to avoid one owner holding proxies to have his vote x 5 or ten but rather want each owner even though they cannot be present at the meeting to have his or own say in how voting should go. If there is a deadlock on votes, we then give the owner the option to allow his proxy holder to vote his way or stay as per their proxy form. The voting in this case will be for the utilisation of surplus funds for both need items such as lawn mower and improvement items eg refurbish pool area braais. etc Your comments please. Thanks, Viv

A2: Prescribed management rule 7 provides that:

‘Nominations by owners for the election of trustees at any AGM shall be given in writing, accompanied by the written consent of the person nominated, so as to be received at the domicilium of the body corporate not later than 48 hours before the meeting: Provided that trustees are also capable of being elected by way of nominations with the consent of the nominee given at the meeting itself should insufficient written nominations be received to comply with rule 4(1)’.

The nominees do not need to declare that they are of sound mind etc. A person is presumed to be of sound mind until the contrary is proven and if it turns out that a nominee who becomes a trustee is of unsound mind, s/he will automatically cease to hold office as a trustee in terms of the provisions of PMR 13.

If a trustee nomination is not signed then one of two things could happen at the AGM:

As for your query regarding proxies, a proxy can be given a general or a specific mandate. A general mandate will give the proxy a discretion regarding how to cast the owner’s vote whereas a specific mandate will give the proxy specific directions regarding how to exercise the owner’s vote. In your situation, if all owners who appoint proxies give them specific mandates then each owner will effectively “have his vote”, but you can’t stop owners from giving general mandates to their proxies, and if they do then each owner may not effectively “have his vote”. If there is a deadlock you cannot allow those proxies with specific mandates to change their vote so as to break the deadlock as that would be contrary to the authority delegated to them by the owners concerned.

No one wants to be a trustee

Q3: I currently manage a complex of 40 units. The problem is, is that not one single owner (except the current Chairman) wants to take on the role of Trustee. Every year it’s the same 3 people that rock up at the AGM’s. Any suggestions?

A3: Owner apathy can be a problem in sectional title schemes, but most of the time when owners are not interested in attending and participating in meetings it means they are happy with the way the scheme is being run and therefore you may be able to give yourself a pat on the back! The moment the owners are unhappy with something they will come running to meetings to complain. I had a chairperson tell me once that when he wants owner attendance at a meeting he puts something seriously controversial on the agenda like the removal of all pets in the scheme…

A suggestion for how you could motivate owners to stand as trustees would be to offer them remuneration, after complying with the provisions of PMR 10, for this service. As the position of a trustee is normally a volunteer position many people are not interested in giving up their free time ‘for nothing’. But if you could offer to pay them for their time you may find that a few more people are interested in the positions.

Back to Paddocks Press – July 2010 Edition