Threat to the financial stability of home owners’ associations averted!

I am sure that all Paddocks Press readers know that an owner cannot transfer a unit in a sectional title scheme without first getting a clearance from the body corporate.

The legal foundation for this position is in section 15B of the Sectional Titles Act, 95 of 1986 which provides that the Registrar of Deeds “shall not register a transfer of a unit or of an undivided share therein, unless there is produced to him a conveyancer’s certificate confirming either that the body corporate has not been established or, where it has, that it has certified that ‘all moneys due to the body corporate by the transferor in respect of the said unit have been paid, or that provision has been made to the satisfaction of the body corporate for the payment thereof’.” The certificate from the body corporate is known as the “levy clearance certificate”.

Without this provision, owners could cease to be members of the body corporate on transfer of their units without paying what they owe. The body corporate’s claim would not evaporate, but it would be very much harder to collect without the security of the “embargo” on the unit.

Home owners’ associations (HOAs) are not governed by a national statute, so there is no law that makes a similar provision for them. But since the 1940s, these bodies have been established on the same premise. The provision preventing transfer of an individual property in an HOA without a levy clearance certificate is inserted in the title deed of each property. It 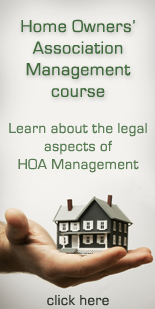 has the status of a personal servitude in favour of the HOA and provides that the transfer of that property may not be registered without the lodgment at the Deeds Registry of a “clearance certificate”. The Registrars have always allowed the imposition of these title deed conditions, which are usually required by the local municipality that approves the major subdivision on the basis that an HOA will be formed to take transfer of its infrastructure and manage it at the expense of the owners of the individual properties.

In 2010 the Chief Registrar of Deeds issued Chief Registrar’s Circulars 46, 47 and 62 which, in practical terms, meant that when the Sheriff sells a property in an HOA the Registrar must ignore the title deed condition that requires a clearance from the HOA before registering the transfer. So on a transfer resulting from a sale in execution, when monies would almost certainly be due by the owner to the HOA, those monies would not have to be paid before transfer is registered.

The analogy with sectional titles would have been if the Chief Registrar had instructed the Registrars not to require a conveyancer to certify that all amounts had been paid to the body corporate when a unit was sold in execution of a unit owner’s debts. The HOA’s embargo on transfer, enshrined in the title deed of every individual property in the HOA, is considered to be a vital element in the financial stability of an HOA.

In response to the application of CRCs 46, 47 and 62 of 2010 the National Association of Managing Agents and the Association of Residential Communities joined forces to protect HOAs. They obtained an interview with the Chief Registrar and his staff and explained the very substantial negative effects of the resolution in practice.

“Home owners associations have, for a considerable period of time, solely relied on the conditions registered against title deeds for ensuring collection of monies owed to them. The passing of these resolutions has effectively pulled the carpet under their feet.”

There are some important principles behind this story:

1. Government officials are not necessarily aware of how community schemes operate and they can, unintentionally, take administrative steps that negatively affect these schemes. Hopefully the pubic education that will be carried out by the Community Scheme Ombud Service will address this issue.

2. When government officials are approached respectfully by credible private sector bodies who can show that they represent a substantial proportion of community scheme stakeholders, they are open to discussion and debate and, as in this case, will consider reversing administrative action that is shown to have unintended negative consequences.

Professor Graham Paddock is one of the Course Conveners for the Home Owners’ Association Management course. The next course is due to start on 8 August 2011. For more information please contact Kate on 021 685 4775 or kate@paddocks.co.za.