The anatomy of a property bubble

Property bubbles seem like strange things: if everyone wants to buy and build better property, why should this cause the prices and investments to crash? Using a simple demand and supply framework, we can explain one way that this can happen.

All prices in a free market are set by the interaction of demand and supply. Demand and supply curves are on the axes of price and quantity. The demand curve is a downward-sloping curve that shows how much is demanded at every level of price. The supply curve is an upward-sloping curve that shows how much is supplied at every level of price. Only when these two curve cross – at a price where the amount demanded is equal to the amount supplied – is the market in equilibrium and the price set. The diagram below shows a market where the demand and supply of apartments in Sea Point during January is at equilibrium, where 20 apartments are demanded and supplied at a price of R3 million each. 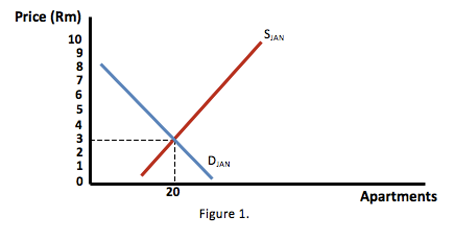 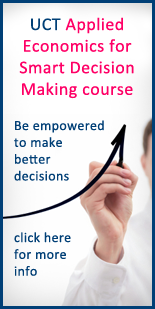 Imagine that between January and March, national income increases and more people can afford to buy apartments. This will have the effect of increasing demand and the entire demand curve will shift to the right to DMAR. Because no more apartments have been built, the increase in demand has caused the price to go up to R5 million. At this new price, suppliers of apartments have a greater incentive to put their apartments on the market and the supply increases to 25 apartments. Note that there is a difference between more existing apartments entering the market and new apartments being built. The amount of existing apartments on the market will increase to match the price and decrease when price decreases; this is shown as a new point on the existing supply curve. Building new apartments means that there is greater supply at every price, and therefore the curve will shift.

Property investors see that the price of apartments has nearly doubled in two months and they think to themselves that if they get in now, they can surely make a killing. The demand for Sea Point apartments therefore increases again as investors buy. By June, it has shifted out to DJUN and established a new price in the market of R7 million at a supply of 30 apartments. 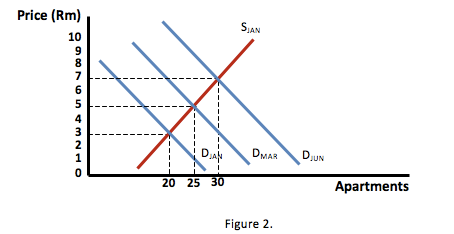 Property developers are watching this and thinking that they need to get in on the action. If prices have risen so much, surely building a few more apartment blocks will mean they make a lot of money? They start building in June and plan to complete the apartments by December. In the mean time, demand has continued to increase and, by December, it has increased to DDEC. If the number of apartments built remained at January levels, then the price would go up to about R9 million. But because all the construction is completed in December, supply jumps out to SDEC Everyone was building apartments to capitalise on the property boom, but this increase in supply has created a new equilibrium, right back down at R3 million (Figure 3). Developers were increasing supply to match demand but, because many developers were doing, this supply overshot demand. When supply is higher than demand, prices come down. In this case, the number of new apartments was enough to increase the supply and drop the price back down to its lowest level, rendering the investments pointless. 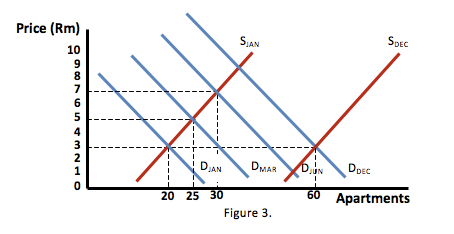 As developers see that the price is coming down, they either sell their developments quickly to try and recoup losses, or they hold onto them hoping that demand will pick up again in the future and they will one day be able to get the returns that they were hoping for.

This poor foresight is one reason why the market can crash. Another is that developers increase supply by a modest amount and incomes drop unexpectedly, shrinking demand and forcing developers to drop the prices of their apartments and make less profit, or even losses, depending on how much they invested.

The smart property developer and investor needs to understand that if they have seen a good investment opportunity, then the chances are that others have too. They need to engage in investments that take into account the possible actions of others and not just assume that the market will stay as it currently is.

Pierre Heistein is the course convener for the University of Cape Town Applied Economics for Smart Decision Making course which is presented in conjunction with GetSmarter. The course starts on 14 March 2011.
This article is published under the Creative Commons Attribution license.
Back to Paddocks Press – February 2011 Edition
Previous Post Q&A with the Prof – 2011 02 Next Post Paddocks Club