Below is an example of two of the questions on the discussion forum on Paddocks Club. We want to show what is available to our Community Members!
1. Payments to a neighbourhood watch
Question:
We have a situation where a body corporate has billed the owners a monthly security of R300.00 for the neighbourhood watch. This neighbourhood watch is not in a boomed off area but does security watch for about 3 suburbs. 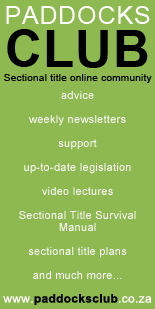 My question is, as this is a voluntary service offered to the community, how can the board of trustees make a decision to bill the owners and advise that this is compulsory to pay for this service?  In my opinion this does not fall under section 37 and as such has nothing to do with the day-to-day running of the complex. Please can you advise?

I think that it could be argued that a BC joining a neighbourhood watch is within its powers, as long as the effect is to make the scheme safer.

But this is the type of decision that should be made by owners, not trustees. The body corporate’s contributions should be budgeted for at the AGM.

Unless the PQs of all sections are the same, the BC cannot bill each owner a set R300 p.m.

2. Trustee in arrears with levies
Question:

We have a trustee who was nominated and elected as prescribed and also qualified as per management rule 5. However, the trustee has, as many other people in these times, fallen into difficult times and is behind in the payment of levies.

Graham’s answer:
A trustee who falls into arrears with payment of his or her levies is not disqualified from office. And his or her voting rights are not affected by the fact of the arrears.

In practice I suggest that there should be a distinction drawn between trustees who have short-term financial difficulties and can explain how they intended to pay off the arrears and those who are chronically in default. It can be argued that chronic levy defaulters should not be trustees because they are unlikely to be prepared to raise levies when necessary, given that this will worsen their existing situation.
This means that owners should be sensitised to the levy payment history of persons nominated to serve as trustees and should refuse to elect any person whose payment record indicates that they will be influenced in their official duties by the personal inability to pay levies.
Article reference: Paddocks Press: Volume 7, Issue 8, Page 4
Professor Graham Paddock is available to answer questions on the discussion forum for Community Members of Paddocks Club. Get all your questions answered by joining Paddocks Club at www.PaddocksClub.co.za.

Back to Paddocks Press – August 2012 Edition
Previous Post What happens when the owner of a sectional title unit dies? Next Post Are exit levies taxable?