Question
Please help me urgently. I am chairperson on a body corporate where the previous trustees and chairperson “resolved”, without seeking the owners’ permission, that a farewell gift of R57,000 should be paid to the caretaker as a thank you for 17 years of service.

The trustees resolved, during the trustees’ meeting, that this money be paid out. They also instructed the managing agent to draw up a letter to the caretaker (who already resigned and received all leave pay and monies due to him in accordance with the Labour Relations Act) saying that they have decided to give him this money. However, the money was not paid out: the managing agent deterred the trustees as he felt that something was not right. At the following trustees’ meeting, they resolved to put the amount in the budget and present it to the owners at the next AGM, which they did.

The owners were against this and voiced this to the chairperson and trustees. The new trustees and chairperson were asked whether the matter was now closed, and the new chairperson assured that it was resolved and that no money would be paid out, especially since the body corporate didn’t actually have the money and the owners were “aggressively against it”. 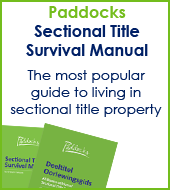 Answer
Do not pay this money!

The situation you describe appears to be one in which the previous trustees acted wrongly.

Do not panic because you have received a lawyer’s letter; this is inconsequential in the bigger picture.

Do not worry that you cannot find anything in the Act that says you don’t have to pay out. The Act does not contain specific information for every situation that could come up; it contains general principles. Here are the ones that I think will probably apply.

(a) Each year, the owners approve a budget that includes specified anticipated expenses – they never gave the trustees authority to spend their money in this way and now, when asked, they oppose the “gift”.

(b) A sectional title body corporate is not a charitable institution that collects money to be spent as the trustees see fit; it collects money to spend on the expenses detailed in the Act and PMRs. This substantial promised amount is an absurdly large sum for a “parting gift” (by the way, an “honorarium” is not a parting gift but a nominal amount paid to someone who is not getting a salary but does ongoing work).

If the previous trustees felt that the caretaker needed a lump sum payment, for whatever reason, they were not entitled to dip into the body corporate’s funds to pay it without the approval of the body corporate, and the proper way to get that approval was to put the proposed expense in a budget, as later trustees did.

Do not answer the lawyer’s letter. Go to an attorney and ask him or her to deal with the matter. If the ex-trustees worked with the scheme’s current attorney, go to another attorney.

Article reference: Paddocks Press: Volume 5, Issue 9, Page 7
Professor Graham Paddock is an authority on sectional title law and practice. He is one of the Course Conveners of the University of Cape Town (Law@Work) Sectional Title Scheme Management course. The next course is due to start on 6 December 2010. Click here for more information about this course.
This article is published under the Creative Commons Attribution license.
Back to Paddocks Press – September 2010 Edition
Previous Post Candice Jooste – Our coordinating queen Next Post Geysers