Levy defaulters and their legal representatives often contest the liability to pay compound interest (interest upon interest) on arrear levies. They dispute their liability on the basis that compound interest can only be raised where agreement between the parties or statutory provision to that effect exist.

“An owner shall be liable for and pay all legal costs, including costs as between attorney and client, collection commission, expenses and charges incurred by the body corporate in obtaining the recovery of arrear levies, or any other arrear amounts due and owing by such owner to the body corporate, or in enforcing compliance with these rules, the conduct rules or the Act.” 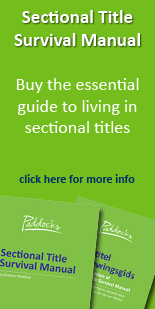 “The trustees shall be entitled to charge interest on arrear amounts at such rate as they may from time to time determine.”

The court assigned the normal meaning to the words “arrear” (outstanding) and “amounts”. “Arrear amounts” was therefore held to be a broader term than “arrear levies”.

What is perhaps most interesting about the judgment is the court’s conclusions regarding the fiduciary duties of trustees. Obiter, the court was of the view that trustees would possibly fall short of their duties if they did not resolve to levy compound interest on arrears, since compound interest would be earned on invested levies at a commercial bank.

In order to ensure that bodies corporate are able to substantiate their claim for compound interest, it is advised that the trustees should resolve to the levying of compound interest in writing.

Trustees should be careful not to raise the interest rate too high; courts will not uphold an interest rate deemed to be usurious. Interest at a rate of 15.5% per annum, such interest to be capitalised monthly in arrear, is recommended.

Lastly, the sectional title scheme community should be pleased to note that the Pietermaritzburg High Court ruling with regard to the inapplicability of the National Credit Act to levy claims in T.S. Dlamini v Body Corporate of Frenoleen (AR611/09, delivered 11 March 2010) found favour and was followed in the Mitchell v Die Beheerliggaam RNS Mansions judgment.

Neil de Goede graduated with an LLB from the University of Kwazulu-Natal in 2008. In 2009 he joined Lomas-Walker Attorneys in Westville, Durban as a candidate attorney, where he has been a part of the sectional title and litigation team since.

Back to Paddocks Press – September 2010 Edition

Previous Post Amending scheme rules step by step Next Post Electricity bills | Are you prepared for the increase?