Making and amending rules in a sectional title scheme

Some schemes, particularly older ones, also have “house rules” but these are rules that the body corporate has allowed the trustees to make and they should only deal with simple issues like when to put the refuse out. It’s best to stick to using the conduct rules for all such “housekeeping” provisions. 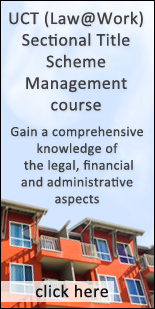 The original intention of the Act was quite simply to provide a legal framework for people to own their own flats. The provisions of the Act and rules were designed to be used to manage the resulting schemes. However, things have changed since 1971 and now sectional title is commonly used to develop commercial, retail and industrial as well as residential schemes. And residential schemes are now not only traditional blocks of flats, but can be “complexes” of varying sizes and include every imaginable type of residence. It may well be that certain provisions of the Act and some rules don’t suit the operation of some schemes any more. Only parliament can change the Act, but the rules can be tailored to better suit a particular scheme.

When the developer of the scheme applies for the opening of the register, he or she may change a few of the prescribed management rules, but once the developer has transferred half the units to other people, the body corporate can change any of the rules. But no amended or new management rule may contradict any provision of the Act or be unreasonable and all rules must apply equally to owners of section put to the same use. This last point means that the body of management rules in a scheme can apply differently to owners of residential units and commercial or retail units in mixed schemes. So, for example, very different rules can apply to signage and security.

Section 35 of the Act stipulates that a unanimous resolution is required to amend or create a management rule and a special resolution is required for a conduct rule. It is not always necessary to convene a special general meeting in order to take these resolutions changing the rules – they can be taken in writing or at the AGM. If they are taken at the AGM, the relevant notice requirements must be met and the required quorum must be present while the resolution is debated and taken. New rules and amendments to existing rules must be correctly filed in the scheme’s register at the Deeds Office and only then do they become enforceable.

Back to Paddocks Press – June 2011 Edition

Hi we stay in a sectional title complex in the past few weeks we have had a couple of security incidents, as a board of Trustees we have reinforced the electric fence and put cameras which seems to have helped.
A few of the residents have taken it upon themselves to secure their own property by putting in beams with a siren which is causing a bit of a problem has the trustees the right to say have the beams but connected to a buzzer not a siren for your own use.
We do have a armed response which can be activated by the manager if needed

Thank you for your comment. We are more than happy to help, however we do not give free opinions / advice. Please email us on consulting@paddocks.co.za with regards to your matter, and we can provide you with a no-obligation quote, so that we can assist you. Alternatively, join us on http://www.paddocks-club.co.za.